The latter brought me here today, as an inspirational story crossed my way, asking for a voice.

As a millennial I am old enough to remember the world without internet but, at the same time, I am young enough to make use of it as a solution for most of the problems and riddles of the world. Being from the Erasmus generation, I feel part of a world without borders, without limitations of language and culture. A world where we can be close to each other, thanks to the networks we create in real life and keep alive with digital tools.

Who would have said that I would restore some of my faith in the dying Facebook, as it helped to shorten the miles between Italy and Denmark, and reuniting a man living a terrible time in Bornholm with his long-life buddy, his dog, wandering lost in Rome?

I believe our lives are full of meaning, and that destiny provides us with encounters that were meant. And this was the case of Siff, a beautiful dog found in the streets of Rome, that entered the dog shelter where I volunteer at.

It all started when Sabrina, an experienced volunteer in charge of the dog shelter adoptions, published a Facebook post with a picture of Siff, explaining she was found in the streets of Rome in July and had a chip registered to an owner in Denmark, deceased one year ago. So, she was looking for a new home.

My gut said: wait a minute? Who was taking care of her since that? This story doesn’t make sense; someone might be out there looking for her! Let’s admit it, curiosity is a strong motor, and in this case, the thrill of a story worth the title of an Agatha Christie’s book made us go beyond all obstacles.

With a little help from Google Translator, I found a Facebook group for lost animals in Denmark. Going through the names and faces of the group administrators I decided to contact one in particular: Ulla. Don’t ask me why but she seemed trustworthy! She was much more than that: a strong and determined woman whose empathy made her even stronger. Ulla was unstoppable. She talked with journalists, she went to the local radio, she called everyone she knew. Her tenderness spread across a large group of people who, each day, cared and asked around about Siff.

Until one morning, a men sitting in Bornholm feeling grey as the season ahead, saw a picture on the newspaper of his dog. His dog lost in Rome when traveling across Europe on an adventure that was interrupted by bad luck, and he found himself being put on a plane back home having lost everything.

I guess being a foreigner in this country, I could imagine that someone who wouldn’t speak Italian would have troubles finding a lost dog. And, in the dark days we are living in this Nation, a foreigner wouldn’t necessarily be helped by the authorities. And all that possibilities I had imagined were true.

As soon as the owner called Ulla in tears of happiness, the Danish people started a crowdfunding campaign to help him get his dog back in Italy. In Rome, another big-hearted woman with a steel determination joined the team, and from that moment on Sabrina was unstoppable: she found the flights, she got the permits from the private company managing the dog shelter, and from the city council of Rome, to which the shelter belongs.

Yesterday Sabrina was at the airport looking at the sky waiting for that one plain from Denmark to land. She was at the shelter when a happy dog jumped of happiness feeling that his owner was approaching. She was there when they met and the whole world stopped.

The world is full of dreamers, full of love, and full of strong women whose compassion and determination are more than enough to make a real impact in the world. When we are a team, no matter what language we speak, no matter the color of our skin, our Gods and our beliefs, we can change the path of the world. 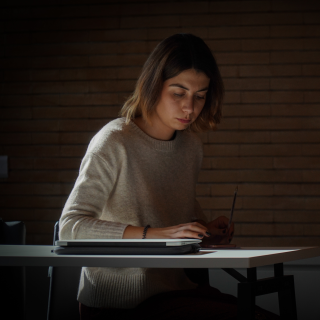